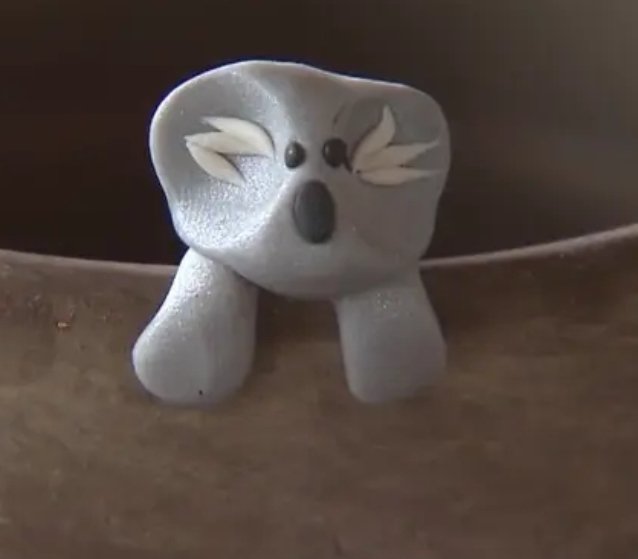 With everything 2020 has been so far and still deems to be, I feel it's so important to share our own superhero's. And although I might be slow on the mark to this one I feel we need a special little post for Owen Colley, the 6 year old boy from Hingham Massachuetts who personally put his own creative spin on raising money towards helping the animals affected in the Australian bushfires.

Can I just say, when I was 6 years of age my main priority was convincing myself I could sing and refusing to share the array of sweets I ate every single day, in short I was just a stubborn, selfish child. Which is why this young boy has melted my ever icy heart by what he has done.

So how has he done it? Well, this special little boy has turned his hand toward making clay Koala's! He decided he knew he could make one in a few minutes so why not make these adorable little guys and sell them to send a message? I think his parents have a young entrepreneur in their midst. (Although albeit his family have helped massively) it's always so special and heart warming when such a young child has a desire to help anyone/anything other than themselves. Howrver these do take 17 minutes to bake in the oven so of course they had to put a minimum donation order in place, with a $50 or more donation you can get one of these little guys for yourself, hand made and there to always remember you helped a 6 year old achieve his selfless dream of saving all the animals he could. This little guy is koala-ty.

How much did he make? According to their gofundme page this lovable family have raised $296,960 so far. The majority of this will be going to the wildlife rescue south coast as originally planned with another portion now also being donated to help the Two Thumbs Wildlife Trust’s Koala Sanctuary which was a later idea by the wildlife rescue which Owen and his family were more than happy to agree to. Help the koala's yay!

His aim? Started at $1000, swiftly moved to $5000, but this young boy and his hard working, committed family didn't stop there, with all of the press and attention they raised $296,960. All to go toward helping the animals affected by these bush fires. And the amazing thing about this is that he wants to encourage other kids to do the same and raise money within their own communities.

How did the Australian bushfires cause harm? They potentially killed billions of wild animals, which as we know, are detrimental to Australia. When you think of Australia what do you think of? Because I personally think sun, spiders, Koala bears, Kangaroo's and wallabys.

Now as I'm sure everyone can appreciate, they had to stop making said koalas, I was disappointed, I'd love a little clay koala reminder from this lovely boy and his family, but the truth is it takes time and a boys got to learn and family got to earn right? It isn't the easiest thing to do make these little guys on a constant basis but this one family alone, this one little boy with a giant heart truly restored my own faith in humanity.

I can be one cynical bitch, honestly. But this warmed the swinging brick where my heart should be. Owen, we need more little guys like you, really we do. And I hope my little boy grows up with the compassion and willingness to put himself out there to make this world a better place just like you did, not forgetting your amazing mum and dad working hard to get wheels in motion and have the patience of saints to bake these little guys.

You all made a difference and you all showed me that one small person and one little idea can make the biggest changes! Well done, you're amazing and there is nothing you can't do!

Right girls and guys I hope you enjoyed this weeks positive story and I hope it makes you smile as much as it did me.

Until next time, don't be a stranger and stay safe.

Dad How Do I?
Comments