Oh these weeks! When someone says have a baby it's great it's so funny how they suddenly forget to tell you all the horrible moments. I wont sugar coat shit and sell it to you as angel delight babe, parenthood is HARD! You know those films/programs where they show 'that' erratic mother, you know exactly the one I mean, they usually plonk her with about 4 kids looking disheveled, with ratty unbrushed hair, black bags under her eyes usually scrambling after one of her pack. Well fuck it. That happens to the likes of us with ONE child too. It's no wonder so many end up with PND and PNA just to mention the top 2 everyone seems to be aware of. Babies go through a lot, which means that we go through a lot, and I'm the first to admit I've shouted at my own baby out of sheer angst, frustration and to be honest, blatant unhappiness. It. Happens! What's important is you take your breaks, you chill at any chance you get. Feeling angry when your baby screams continuously for hours on end due to a 'wonder week' does NOT make you a bad parent, end if story, you are human. But our babies are going through an entire ordeal, they are so new to the world, they haven't even had a chance to decide if they like it or hate it yet (we save that for the teens ha!).

So have you ever heard of the wonder weeks? Because I hadn't until my son was 6 months old. And believe me, the relief I felt when I saw that what my son was doing is completely normal. I mean it was a relief but also made me look at people with more than one child in a different light, like WHY WOULD YOU DO THIS TO YOURSELF MORE THAN ONCE?! Hurts my feeling when he screams until he chokes for seemingly no reason, I count the seconds away just thinking that's one second closer to him stopping right? I've rocked, I swayed, I sang, I cooed, I cried, I relentlessly apologised, it, is, hard!

What are wonder weeks? They are the weeks babies go through development leaps, where they develop new skills and smarts and with those milestones comes hours of upset, pain (ie growing pains) and a lot of exasperated bargaining from you to whatever deity you're offering up promises of good behaviour to in exchange of your baby no longer throwing a fit! That's right, behind every happy video of a baby performing a cute new talent is a string of draining moments where the household was lost in turmoil due to lack of sleep and peace. It has to be said that wonder weeks is the English translation of a Dutch book called Oei, Il Groei, this was written by an anthropologist called Hetty van de Rijt and an ethologist (scientific study of animal behaviour) and developmental psychologist Frans Plooij. That's right ANIMAL behaviour, our kids are animals, that cute little bundle, utter animal! I joke (kind of) we're all animals aren't we? We DO have some kind of pattern of behaviour, so lets delve into what the wonder weeks have to say for themselves shall we? I'm going to skim it, because that's a book and this is a blog, so...

How many wonder weeks are there? 10. 10 I hear you scream. That's a lot, no it isn't. In the grand scheme of things 10 weeks is nothing. And it's a lie if you think pft after 10 weeks they'll be sound. It's also worrying if you think they'll stop learning development at 10 weeks, you're not raising a blob fish!

How long does it last? Apparently this shit show of sleep regression, tantrums and of course happy firsts, lasts roughly the first 20 months of life. Don't shoot me I'm getting this info from sources you can shout at later (don't say I sent you it's just for reference).

How and when? Please see this lovely chart I made below... 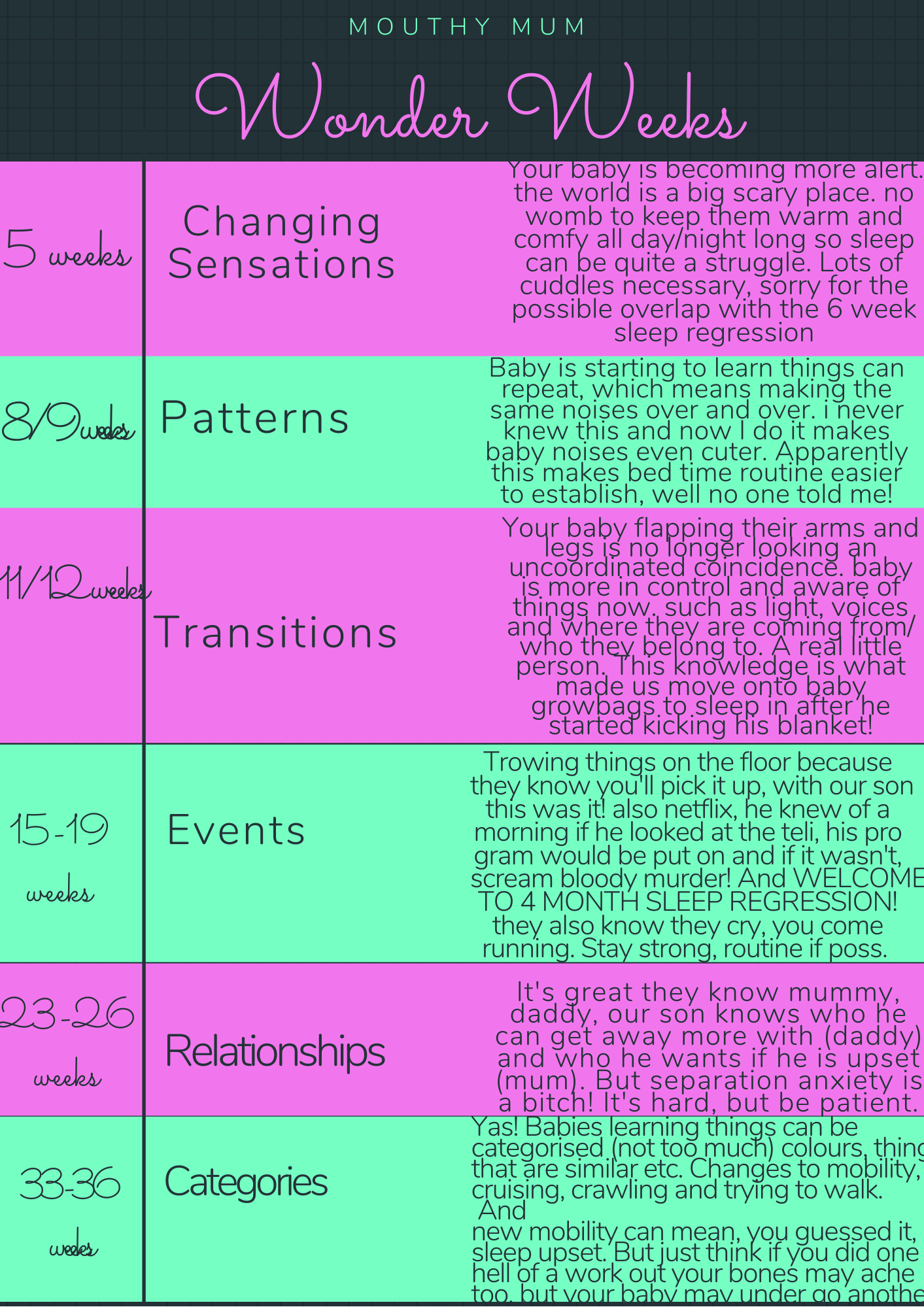 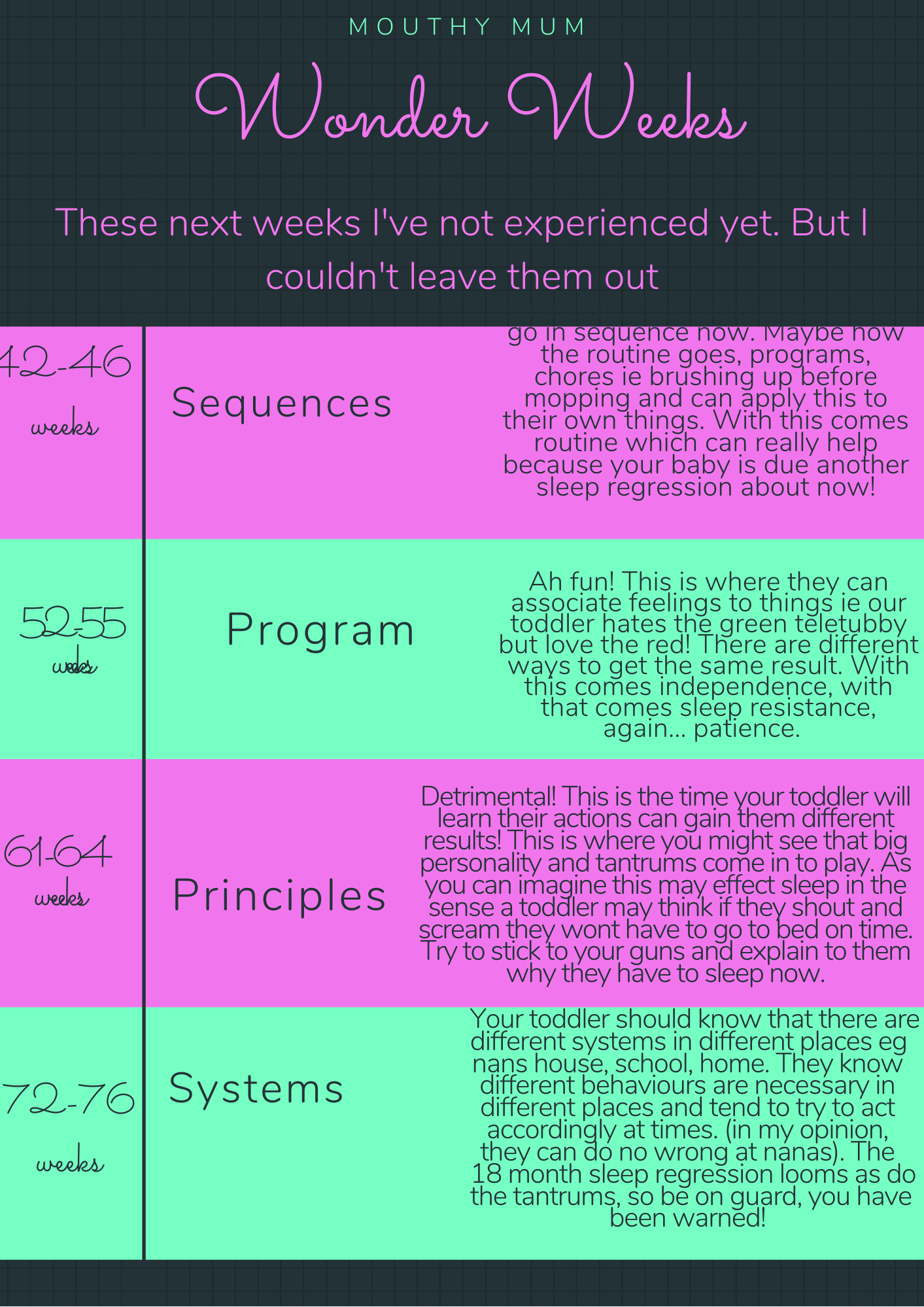 In an overall sense here are the weeks:

Now as I've stated, I've not experienced all of them. My son is just coming up to 8 months and I will say a lot of them are pretty spot on so far. But what I will also say is every baby is an individual person. My son is 5 days younger than a friends daughter, he was staying sat up before her, she learnt to clap before him, he laughed before her, she ate before him, he's now trying to walk, she has zero interest but has said mama, different strokes for different folks. Don't expect of your child because someone elses does, or you may find yourself like me sat with the baby for 2 days uttering nothing to him but 'mama, say mama, can you say mama? Who am I maaaaamaaaa' (I'm not jealous, honest!). Honestly your baby will do things in their own time. I like to think of this as a guideline but as I say pretty spot on.

The wonder weeks are just that. As in you wonder when they're coming, then you wonder why you stayed... then you're filled with wonder when your little dumpling is suddenly doing all these crazy new things. Aptly named I've got to say!

Hopefully this helps some who think something bad is going on. I remember my son teething during a wonder week, the crying was hideous and non stop for a solid hour, my boyfriend was flapping his arse off saying "If this carries on we need to take him to a doctor it's not normal" it was in this moment I realised I was the sane parent! Good luck baby! Ashton and Parson's thanks for existing! So yes, try not to panic all the time and have a little look online, there is so much information at our disposal, and if in doubt ask another mother they may have been through the exact same thing! In times like a pandemic, hospital is an absolute last resort, but if you need help always call and check! Mother knows best, I believe.

Until next time gang, don't be a stranger and stay safe!

Lockdown with a newborn
If I see ONE more shitty nappy...
Milk challenge mayhem
Comments