Well well well, here we are again. I've been meaning to journal this little journey for quite some time but I've been buried under an avalanche of shitty nappies and being physically, mentally and emotionally attacked by my almost 5 month old on the daily, so apologies. But here I am.

I set this one a side a while ago, pretty much when I first started this site and thought how can I go into the absolute shit show that has been our milk challenge mayhem without just looking like a moaning bitch WHILST being informative, and I thought fuck it I can't so i'll just be blunt.

This started pretty much as soon as I realised my son had a milk problem, and I call it a problem, because it was a problem for the entire household. From the get go, the moment I was left alone over night with him, which is wrong by the way. I don't agree with mums having to stay alone over night to care for a new born alone when we've just gone through the most difficult and tiring time in our lives (for most of us anyway) I mean THREE NIGHTS I hadn't slept for  and that was officially, during pregnancy I was getting maybe an hour of consistent sleep for the last 3 months before I had to get up for fear of pissing the bed. Anyway, that first night my son wasn't feeding, I tried to get breastmilk but even though I always imagined I'd fill up fast and let mother nature do her thing, unfortunately I was not graced with milk, very strange feeling thinking if this was back in the dark ages my son would starve, but that's a whole other issue, if anyone wants me to write on that let me know and I will. But my son screamed relentlessly ALL night. I had to practically drag in a midwife who was sat outside the curtain to my bed as if she didn't hear him! After her winding him for a solid hour and telling me it was bad wind I had to put her straight, see she might have seen hundreds of thousands of babies and helped every single one of them, but they weren't MY baby. I knew something different was wrong with my baby. He looked in pain. So I got her to change his milk and BAM like magic he drank the whole little bottle. Roll on 24 hours and we were off home.

Aptamil, boom it did the job... until it didn't. His poo smelled sour and he was hammering his legs down shortly after every feed. He was crying himself awake and really tensing up when he cried along with having a belly that was a little hard to the touch. I knew something wasn't right so again I called the Dr. I didn't bother with the health visitor, what a useless sack of shit she has been since lockdown, ZERO help and assistance in over 3 months, what I would say are the scariest and most detrimental 3 months to any new mum by the way, hormones whizzing, I felt like an ugly fat failure 95% of the time and was so depressed and anxious constantly but whatever. With my first phone call I described everything and yes I over exaggerated his symptoms because as most of us know, if you don't you're more than likely to be fobbed off, I could be there with a leg hanging off and they'd say "dr will call you back" 🙄. I knew what my son was doing were clear signs of a cows milk protein intolerance. And with that the dr prescribed nutramigen and carobel to help with my sons reflux. It took us around 3 days for him to take it because in all honesty, nutramigen stinks of shite, it doesn't smell like milk what so ever it has it's own disheartening aroma, but it gets the job done in my opinion. My son was brilliant on it for the most part. I used to love standing there as my fella wretched cleaning the bottles, it's the small things really, but Mr Mum wouldn't let me do it, he let his dad/mum ego get in the way so I'd stand giggling whilst he's dry heaving rinsing out nutramigen leftovers. 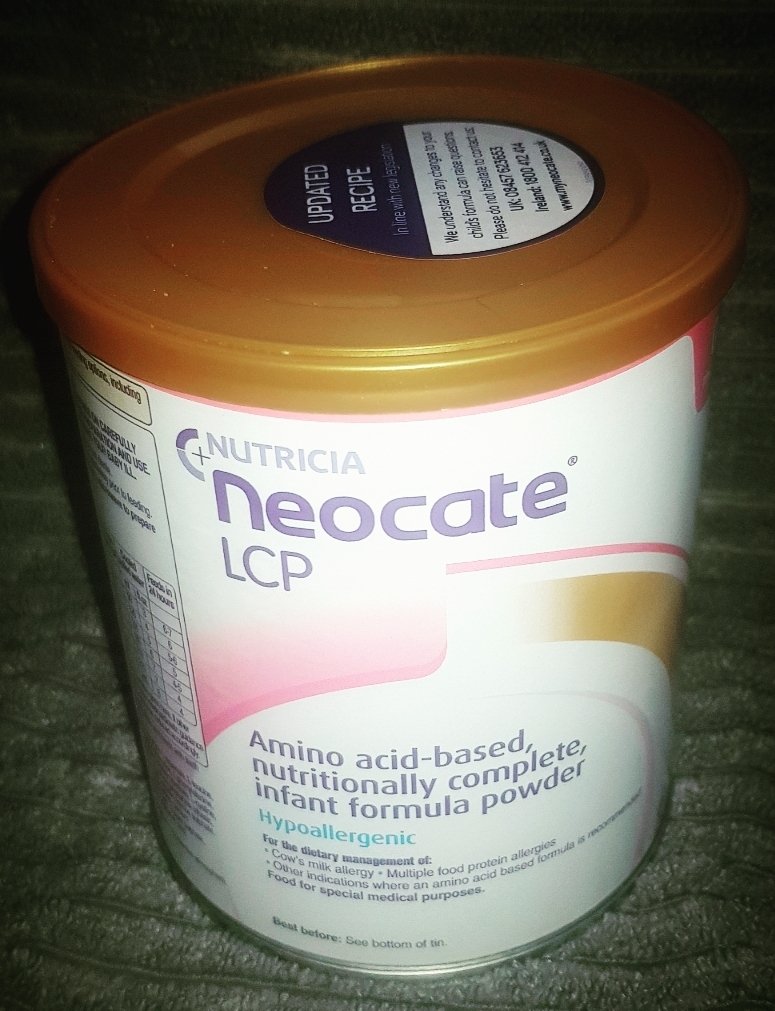 Neocate dream... it really was. Not like nutramigen my son took to it straight away. Within 2 days his poop was back to normal, his belly was soft to the touch and he was his happy playful self again. Absolute euphoria (well, as euphoric as it can be having a 4 month old in lockdown). I really would advise anyone who can see their baby has a CMPA to ask about this milk. One thing my health visitor did advise was that the dr had rushed us onto the milk challenge. Apparently they aren't supposed to do it until your baby has been on the nutramigen for at least 3 months, as their belly hasn't had time to fully adjust yet. This makes sense to me. I personally feel like if you don't push and you aren't a bit of a hard arse, you don't get in this world especially when it comes to prescriptions and things. I also think the milk challenge made my sons intolerance go the completely wrong way and I ALSO know it is no where near over yet. The incompetance is astounding, even in our chemist! I put in an order for a fresh new batch of milk yesterday and my boyfriend went round in the afternoon. To be given... nutramigen! They said they had no neocate in so sent him on his way with a bag of nutramigen. Sorry you may as well have just shit in the tub because my son isn't touching that bollocks! To me it's as bad as a wrong prescription, it's like giving someone who asks for ibuprofen, codeine! You just don't do it! Pissed off is an understatement. Lucky for us we still have some without any cows milk protein in.

My take on it. Basically ALWAYS trust your instincts. If you think something isn't right with your baby then go for it. And if you think your baby needs something they aren't getting or you aren't being helped with then you do what you think is best. Some babies need weaning early and you could be waiting 6 weeks for a dietician to bother, like we are. Some babies have problems with their little hips and need medical assistance to correct it, don't take no for an answer until you believe it or have medical proof, I say this as I know people who have gone through it. My instincts were right, I trust them 100%. If something isn't right, you'll know please push for a second opinion if you need one.

I'm going to attach the NHS website for reflux and CMPA so if anyone is going through similar you can have a look and see if it IS looking like these things. I have a best friend whose daughter is 5 days older than my son and have the same issues, reflux and CMPA (they often go hand in hand) so we had each other to help, but some people don't. If you have any questions, pop me a comment or an email, I'm always happy to help any struggling parent, if I can. It will only be through personal experience though as we all know I'm no medical professional just a mum trying to give her baby boy the best 💙.

Until next time stay safe and don't be a stranger.

Lockdown with a newborn
If I see ONE more shitty nappy...
5 arguments me and my fella have had since having the baby
Comments