So apparently I have no regard

Hi everyone, I thought this post would be awfully fitting for today because in all honesty, people are fucking weird. I'll just paint the scene to you as to what just happened, nothing crazy, except the crazy bitch who commented...

So imagine it, you're lying in your nice comfy warm bed, sheets are perfect and you're in the most perfect little dream. Then all of a sudden you're awoke with a cry, a loud cry next to your head. You turn and it's your baby. Your crazy little bundle of cuteness. So you pacify him for a moment while his dad takes the stuff down (the exact same stuff we bring up every night we end up taking down every morning). He's crying but giggling because he's happy but wants his bottle, emotional range, fair play I'm 28 and I can't even do that. My boyfriend comes upstairs and gets our baby and they go down leaving me to my devices, and as I usually do I lie there and check my socials before diving back in for a lovely little lie in. I feel I deserve it I was up from 5:50 yesterday morning until midnight last night.

It's great, but then I click onto facebook. Good old facebook, the realm of keyboard warriors and people who like to pretend their lives are perfect for polite conversation. I have a notification I see, well why don't we just click on that little one there. Oh, it's a comment, a comment from my old college tutor, wonder what she's up to? Did she see my site post? Was she letting me know her experiences with baby milk from when her kids were young? Because that's the post she has commented on, surely, surely it must be something completely relevant? Let me expand, I put a post up asking if anyone had had any experience of their babies reacting poorly to nutramigen as (as stated in my previous post on here) my sons belly is going crazy, he's crying, bringing his knees up and his nappies are explosive! (I had rang the dr but they had failed to call me back so I asked people on facebook instead until the drs opened back up the next day). So SURELY as a mother, her response would be relevant or at the least telling me she doesn't know? as people feel the need to comment to let you know thst they don't know things these days. But no no, instead, I receive a comment stating that I have no regard for anyone else? That she loves me and my baby (who she has never met, I haven't even seen her in over a decade except bumping into her 2 or 3 times whilst out shopping) but SHE no longer wants to see ME on HER posts. And to delete her. YOU'RE COMMENTING ON MY FUCKING POST LOVE!!! We all have the same access to the same buttons. I mean one would only assume that your phone screen works for the whole fucking phone or what ever thing you're using to navigate your way through facebook today?! Talk about a narcissistic mind set. I'm going to get rid of you, but I want you to know I don't want you in my life so I wont delete you, no, it is YOU who will delete ME upon my request. And a very public request may I fucking add. If you want to go dear, go! This isn't an airport, no need to announce departures here.

What kind of middle aged bullshit is this? I know you know how to work facebook, I have evidence of you using those same appendages to press send on your fucking irrelevant comment ON MY POST! 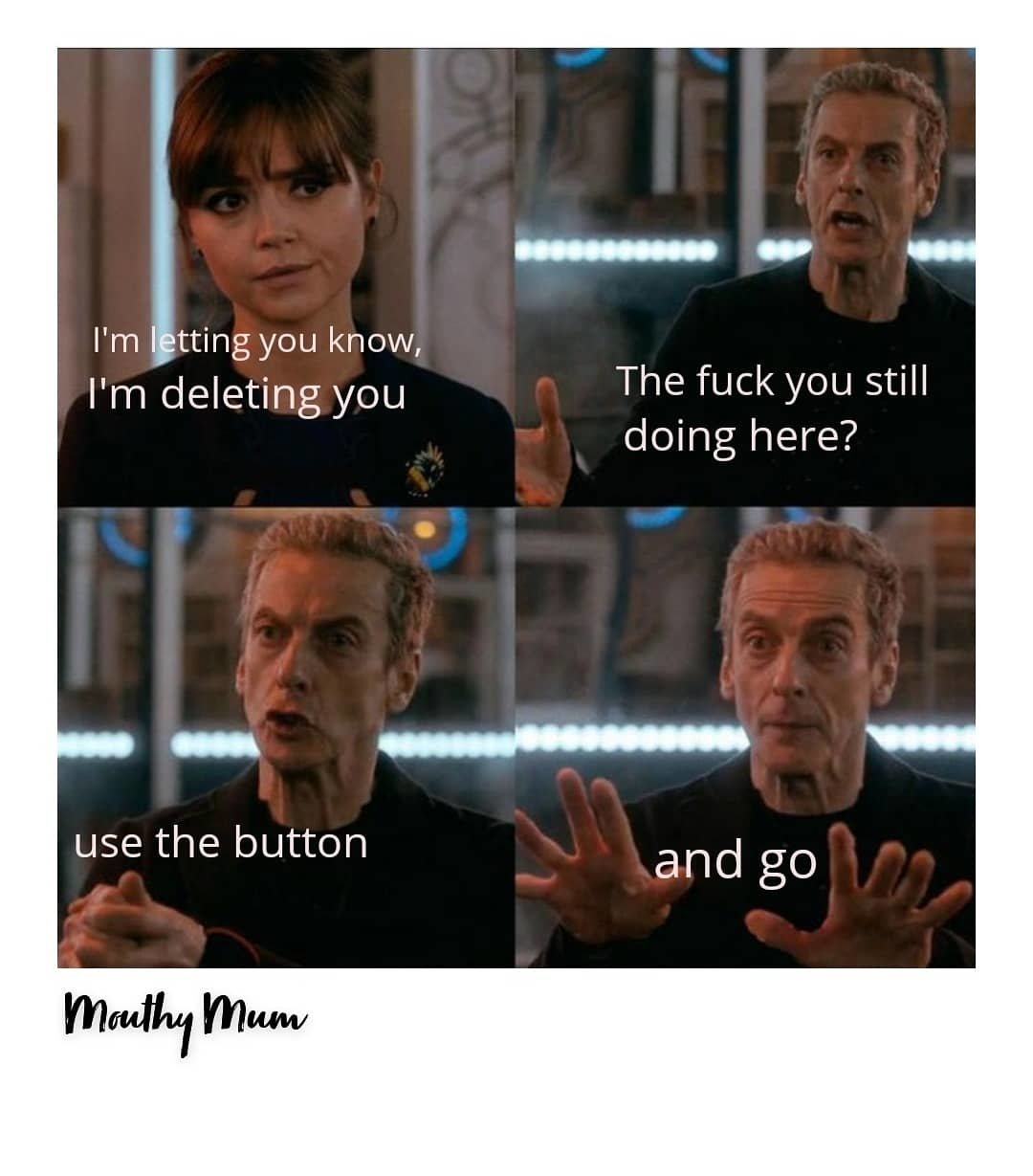 So me being the curious person I am, I clicked on her facebook page first thinking you know what, maybe she's going through something and wants to lash out? Maybe something to do with a baby? Maybe she really has an aversion to hearing about nappies or something, some reason I can't fathom. So snoopedy snooping I go. I click on her page, and what do I find? Her CAT just died. So all I can think of is her TWENTY year old cat just died so she's got rat arsed and started dishing out the old harsh truths? Like sorry your cat just died Shei but it's hardly relevant to my sons bowl movements now is it? Except what truth do you have for me Sheila my dear? That I'm a shit mum, or that I'm a bad student? No! You just flat out say that I'm basically a trash person, which I don't give a shit about to be honest your opinion is pointless and sometimes I am. And maybe I HAVE got lost in a world where only me and my little family exist sometimes. Maybe I haven't kept in touch with everyone but you know what this is LIFE. The fuck do you want me to do love? Go clicking down my entire friend list telling everyone I love them once a week? No, because that would make me insane and to be perfectly honest between running a house, being a mum, maintaining a relationship and trying to make my presence in the world of blogging known whilst also trying to keep fit and eat healthy which takes a LOT more effort than influencers would lead you to believe, I don't have the time other than the fact that I simply don't want to.

It's just the sheer cheek of 'I don't want you on my social media but I feel so important that you need to know what I think about you first' as IF being a new mum stuck quarantined filled with anxiety isn't bad enough you NEED me to know that you think I'm a shit person. But you know what, I realised quickly that people like that are shit people. People who have such a sense of self importance that they feel the need to batter you over the head with their views and opinions, THEY are the shit people.

Your comment is as irrelevant as your presence. And with that thought I did the honours. I made both our lives easier and I deleted the bitch and her comment. Job done. I did lose sleep over it, I lost sleep in order to write this post and have a laugh with my mates about it. I. Regret. Nothing!

I mean in all honesty love, if I'm what you're thinking about at 5 am whilst you're mourning the loss of your cat, then you've got bigger issues than your opinion of me. Cue a picture of my head with the eyes cut out stuck on a dartboard. I can laugh it off.

So to anyone who ever gets told "I don't like you", "you're annoying", "you're selfish" or any other attack on your personality and character, cut that toxicity right out of your life. I mean I usually applaud people for cutting people out who serve them no purpose, if I am this person to you and you need to cut me loose, good for you, do what's best for you, I'll even support from the shadows. But in my life if it asks to be given the boot, do it. Free your mind and vibes from their negativity because life's too short to give a shit. She was right about one thing though, I do have a complete disregard for HER now 😊.

Message to Sheila: put the wine down dear, I think you've had enough for Friday morning.

Don't be a stranger and stay safe